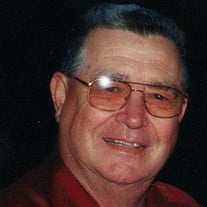 Roma Wallace Hicks was born on January 3, 1942 in Macks Creek, Missouri. He entered his heavenly home on May 11, 2018 at the age of 76 surrounded by his loving family. As a young teenager he gave his heart to the Lord and was baptized. In 1965, he rededicated his life and joined the Louisburg Baptist Church. Wallace was united in marriage to Laverna Mae Williams on October 8, 1961. They moved to Kansas City, where he worked as a pipe fitter for the Gas Service Company. In 1968 they returned to Dallas county where they purchased their first farm. In 1978 they sold that farm and purchased a smaller farm north of Buffalo where they still reside. After selling the large dairy and beef farm he didn’t think he had enough to do on the small acreage so in 1985 he started working for Associated Grocers delivering groceries until his retirement in 2005. From this marriage they were blessed with two children. One son, Roma Gregory Hicks and wife Leisa of Buffalo and daughter Laura Dawn Hamilton and husband Larry of Republic. Wallace loved farming and traveling, but most all he loved his family. He enjoyed watching college basketball and NHRA drag racing. His greatest love was spending time with his loving and devoted wife. His quick wit and ready laugh will be missed by all. In July, 2011 he underwent surgery for a brain aneurysm. After the surgery he suffered a massive stroke. He was cared for at home by his wife and family. Through God’s strength, Wallace’s courageous will and the strong love of his family, he survived numerous hospitalizations before he was called home by the Lord. Wallace never complained and never lost his sense of humor. He was an inspiration and a hero to his family and friends. Wallace was preceded in death by his parents, W.R. and Edith Hicks; sister, Mary Katherine Fullerton; brother, Danny Hicks; nephew, Brian Williams and two brother-in-laws, Charles Williams and Robert Fullerton. He is survived by his wife Laverna; one son, Greg (Leisa) Hicks of Buffalo; daughter Laura (Larry) Hamilton of Republic; six grandchildren, Quintin Hicks, Neil Hicks, Erin Hicks, Nicole Stander, Megan Artz, and Matthew Hamilton; and countless other family members and friends. In lieu of flowers the family requests donations be made to the Gideon's International.

Roma Wallace Hicks was born on January 3, 1942 in Macks Creek, Missouri. He entered his heavenly home on May 11, 2018 at the age of 76 surrounded by his loving family. As a young teenager he gave his heart to the Lord and was baptized. In 1965,... View Obituary & Service Information

The family of Mr. Roma "Wallace" Hicks created this Life Tributes page to make it easy to share your memories.

Send flowers to the Hicks family.