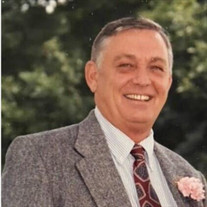 Ronald “Ron” Lee Miller, son of Merle and Wilma Lucille (Sayles) Miller, was born on May 17, 1944, in Perry, Iowa, and departed this life on February 7, 2022, at his home in Buffalo, Missouri. At the time of his passing, he was seventy-seven years, ten months, and nineteen days of age. Ron held many titles throughout his lifetime. He was a farmer, a business owner, a husband, a father, but his favorite was “Papa”. Born in 1944, Ron was raised on a farm in Woodward, Iowa. In 1974, he and his wife, Diana, moved to Buffalo, Missouri. He continued his family legacy of farming and livestock throughout his lifetime. In addition to being a farmer, he enjoyed starting many ventures which allowed him to travel the country, earning numerous awards and accolades along the way. Ron’s many businesses included: Miller’s Go-Kart Racing, Miller Implement, Buffalo True Value, Ozark Floor Care, Ozark Store Fixtures, and farming corn, soybeans, hogs, cattle, and raising and showing draft horses. However, his true love and passion was his family. He proposed to his bride, Diana Farley, after just six months of dating, and over the last fifty-three years of marriage they have built a wonderful family together. They were blessed with five children, thirteen grandchildren and four great-grandchildren. During their frequent and loud family gatherings Ron would remark, “How blessed am I to have so many and not a dud in the group!” Ron was preceded in death by his mother and father, Wilma and Merle Miller of Woodward, Iowa, and his sister, Marilynn May of Woodward, Iowa. Ron is survived by his wife, Diana Miller of Buffalo, Missouri; children, Susan (Drew) Keith of Buffalo, Missouri, Debbie (Scott) Daniels of Nampa, Idaho, Julie (Mitch) Brockman of Buffalo, Missouri, Scott (Kami) Miller of Buffalo, Missouri, and Christy (David) Dickson of Grain Valley, Missouri; thirteen grandchildren, Landon (Lea) Keith Buffalo, Missouri, Gracie (Stiel) Carter Urbana, Missouri, Caleb (Melanie) Daniels, Noah (Kerri) Daniels, Jonah Daniels, Sophie Daniels all of Nampa, Idaho, Megan (Alex) Valencia-Darnell of Kansas City, Missouri, Wyatt Darnell of Columbia, Missouri, step-grandson, Keegan Brockman of Buffalo, Missouri, Shaylie (Jarrett) Rogers of Republic, Missouri, Hayden Miller of Buffalo, Missouri, Delaney Miller of Buffalo, Missouri, Olivia Dickson and Carter Dickson both of Grain Valley, Missouri; and four great-grandchildren, Layne, Barrett, and Colter Carter and Lincoln Keith; two sisters, Loretta Miller of Oklahoma City, Oklahoma, and Donna (C. A.) Wilson of Buffalo, Missouri. He also leaves other family members and many friends who will all truly miss him. Funeral services will be held at 11:00 a.m. on Friday, February 11, 2022 in the Calvary Chapel Freewill Baptist Church with Dr. Douglas Earls and Pastor Mark Elliot officiating. Escorts will be Landon Keith, Caleb Daniels, Noah Daniels, Harden Miller, Jonah Daniels, and Wyatt Darnell. Honorary escort will be Carter Dickson. Visitation will be from 10:00-11:00 a.m. Friday at the Church. Interment will be in the Maple Lawn Cemetery under the care and direction of the Cantlon-Otterness & Viets Funeral Home of Buffalo. In lieu of flowers, the family requests donations be made to Hospice Compasses, the Convoy of Hope, or Calvary Chapel.

The family of Ronald Miller created this Life Tributes page to make it easy to share your memories.

Send flowers to the Miller family.