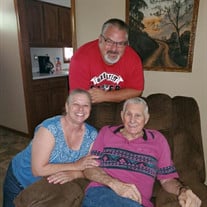 Ronald “Ron” Sheridan Sturdevant age 80 of Harrisonville, Missouri passed away Saturday, November 28, 2020 at Research Medical Center in Kansas City, Missouri. Ron was born June 2, 1940 to Roy and Dorothy (Garvin) Sturdevant in Bennett Springs, Missouri. Ron grew up in the Bennett Springs/Lebanon area. He helped his Grandma Garvin work at the cabins as a teenager. In the U.S. Army his travels took him to Mexico, Hawaii, Japan, Korea, Alaska, the Atlantic and Pacific oceans. Ron was discharged as a Lance Corporal. Ron married Wanda Jean Evans in Kansas City, Mo on January 14, 1961. Although he was a believer of Christ, he rarely attended services. However, Wanda convinced him to be Baptized along side her at Pleasant Prairie Baptist Church in Peculiar, Missouri in 1970. He owned Cleveland Nursery and Landscaping in Cleveland, Mo. It was truly a family business. He, Wanda and their son, Ben, put in a lot of years of hard work there. Anytime the family went for a drive anywhere, Ron liked to point out every landscape job he had done to all the occupants of the car. Ron had a very strong work ethic that had been instilled in him since childhood. He could never sit still and kept busy from sun up to sundown. Even a heart attack, multiple strokes and cancer didn't stop him from getting a job done. He raised hogs, cattle, built houses, and spent lots of time at the lake or riding his custom trike with Wanda's arms wrapped around his waist. He was a big fan of oldies and classic country music. He was an excellent singer and enjoyed playing guitar. Even after dementia stole his memory, he still knew every word to every song he’s ever heard. The family loved to hear him sing. Ron had a reputation as being a "tough guy". But he really had a good, caring heart inside. If a friend or family member needed help, he was often the first person to step up, even doing so anonymously at times. That tough guy image he displayed got visibly softer after his only grand daughter was born. She melted him and had her Papa wrapped around her little finger. Ron was preceded in death by his parents, an infant son, Ronald Jr. and his wife, Wanda Jean Sturdevant. He is survived by two children, Ben Sturdevant and wife Crystal of Harrisonville, Missouri and Ronda Bailey and husband Glenn of Belton, Missouri. A brother Gary Sturdevant and wife Lynda of Westline, Missouri. Two sisters Donna Balke and husband Bud of Lebanon, Missouri and Sharon Jamieson and husband Steve of Falcon, Missouri. 4 grandchildren and seven great grandchildren. Funeral service for Ronald will be 2:00 pm Friday, December 4, 2020 in the Cantlon-Otterness & Viets Chapel with burial to follow in the Lone Rock Cemetery in Windyville, Missouri under the direction of the Cantlon Otterness & Viets Funeral Home of Buffalo, Missouri. Visitation will be from 1:00 to 2:00 pm Friday, December 4, 2020 before the service in the Chapel. In lieu of flowers memorials may be made to the Alzheimer’s or Dementia Association.

The family of Ronald "Ron" Sheridan Sturdevant created this Life Tributes page to make it easy to share your memories.

Send flowers to the Sturdevant family.