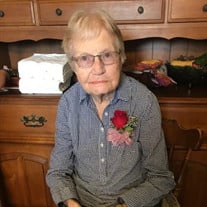 On Monday, February 10, 2020 Rose Marie Powell, (Bennett), ascended to heaven on eagles wings joining the plethora of friends and family who had passed before including her husband Lovel Powell, who she married in 1949 and was deeply devoted to since. She will also be welcomed with open arms her parents, Fred and Beatrice Bennett, her son-in-law Wes Bearden, her sister-in-laws Ann Bennett and Dixie Jewell Grittman, and brother-in-law Eldon Grittman. She was born on April 6, 1928 on the O’Bannon Prairie in Dallas County on her family’s dairy farm. She walked ¾ of a mile each way to attend school in Spring Grove where her Aunt Martha taught. The schools were consolidated later and she attended Charity High School where she graduated as valedictorian in 1943. She went to State Teacher’s College in Springfield followed by working at the Agriculture Adjustment Agency. She married Lovel Powell in 1949 in Mountain Home Arkansas. They were a balanced pair complimenting each other’s strengths. The couple moved throughout the United States for Lovel’s job in construction, including: Louisiana, California, and Colorado. Eventually it was time to return to their roots in Dallas County where they raised their two daughters, Carla and Sheila on a dairy farm, now known as Valley Farms. Her strong math skills made the farm work. She could account for every nickel spent and tell you how much a fence cost 7 years later. Lovel and Rose Marie also owned an assortment of businesses, and Rose Marie kept those books as well. A founding member of Bible Baptist Church of Buffalo, Rose Marie’s feet were planted firmly on the rock of Jesus Christ. Rose Marie played piano for the junior high class at Bible Baptist. She also volunteered at many Vacation Bible Schools. She saw the wonder of God in everything – even something as simple as a wildflower. Rose Marie embodied what Jesus commanded as loving your neighbors. She was known to deliver one of her famous pies anytime someone was ill, needed a pick me up, or had something to celebrate. She knew the meaning of comfort food and served it up to anyone needing a serving or two. A potluck wasn’t a potluck without one of her delicious desserts. Her sweet potatoes and coleslaw dishes were also crowd pleasers. She was active in the Louisburg PTA, Dallas County Cattlemen’s Association, and the Louisburg Lion’s Club. She also volunteered for Dr. Griffin at the county health department weighing babies. Hanging laundry on the line, watering her beautiful marigolds, and feeding calves is engrained in all of her family’s mind. She loved her cattle and farm. She was a tough woman, she would get knocked down, both literally and figuratively, and she always got back up without bitterness. She set the bar high as a mother and bumped it up a notch as a grandma, but she surpassed all others as a GiGi. She was the official filleter of fish caught in the ponds, the offerer of extra desserts, and the constant reminder of “let them be little”. Christmas on the farm was always special to her. The traditional Christmas tree was a cedar from the bluff and then cooking a huge spread of everyone’s favorite foods. Rose Marie had a wicked sense of humor and a sharp wit – she was always quick on the draw of funny comebacks and her grandchildren loved her sense of humor and her view on things. Survivors include her daughters; Carla Bearden of Camdenton, MO and Sheila Ghent and husband Edd of St. Louis, MO; four grandchildren, Brett Bearden and wife Denise, Ryan Bearden and wife Kari, Cody Bell, and Michelle Bell-Wilson and husband John. Also her treasured great-grandchildren: Koltyn, Catch, Easton, Kanon, Vida, Sawyer, and Walker. And her brother Bob Bennett. As well as many nieces and nephews. She also leaves her faithful friend, her yellow lab Luke. She was known for her red hair and her kind heart, and her strong belief in Jesus; but to her family, she will forever be remembered as the sweetest mom, grandma and GiGi. Job well done. We were loved. You made a difference. And yes we know, we were the luckiest people in the world to be loved unconditionally by you. Funeral services will be 4:00 pm Saturday, February 15, 2020 in the Buffalo Bible Baptist Church with Dr. Robert Baker officiating, with Joshua Keeny singing. Burial will follow in the Memorial Gardens of Memory Cememtery under the direction of the Cantlon Otterness & Viets Funeral Home of Buffalo. Visitation will be from 3:00 pm right up to the time of the service. in Lieu of flowers memorials may be made to the Buffalo Bible Baptist Church or the Louisburg Lions Club.

On Monday, February 10, 2020 Rose Marie Powell, (Bennett), ascended to heaven on eagles wings joining the plethora of friends and family who had passed before including her husband Lovel Powell, who she married in 1949 and was deeply devoted... View Obituary & Service Information

The family of Mrs. Rose Marie Powell created this Life Tributes page to make it easy to share your memories.

Send flowers to the Powell family.