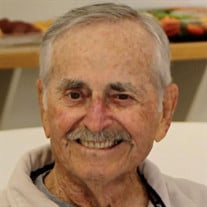 Mr. Russell Harmon, 89, of Warsaw, Missouri, passed away peacefully on July 13, 2021 surrounded by family. Russell was born July 12, 1932 in Dallas County, Missouri to Hanna Lee and Lillie Harmon. After graduating from Tunas High School, he served in the United States Air Force in Japan during the Korean War. He married Peggy Whitworth in 1956 and moved to Independence Missouri where he was blessed with 3 daughters and 1 son. He worked as a mechanical engineer for Hellmer and Medved and Peterson Engineering. His career as an engineer allowed him to travel the country with his family. He was an avid outdoorsman, who loved fishing, boating, and hunting. He also enjoyed bowling and visiting casinos with his wife and friends. Russell and Peggy enjoyed their retirement at Truman Lake in Warsaw, MO for many wonderful years. Russell is survived by his wife of 65 years, Peggy; daughters, Paula Eickhoff, Pam Harmon, Penny McKinney and spouse; his son, Jeffrey Harmon and spouse; his brother Rex Harmon, his sisters, Phyllis Barclay, Marilyn Fitzgerald and Carolyn Hayes, 8 grandchildren, and 3 great-grandchildren. He was preceded in death by his parents; his brother, Roscoe Harmon, and his sisters Irene Clymore and Helen Lee Hyde. Funeral services will be held at 3:00 p.m. on Saturday, July 17, 2021 in the Cantlon-Otterness & Viets Funeral Home. Visitation will be from 2:00-3:00 p.m. Saturday at the Funeral Home. Interment will be in the Hopewell Cemetery under the care and direction of the Cantlon-Otterness & Viets Funeral Home of Buffalo. In lieu of flowers, the family requests donations be made to the Hopewell Cemetery.

The family of Russell Harmon created this Life Tributes page to make it easy to share your memories.