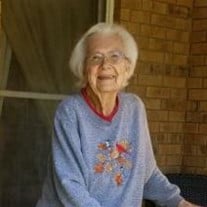 Ruth Dean Weaver Hylemon Jones, daughter of the late Ray and Esther Weaver was born on April 10, 1926 in Wyandotte, OK and departed this life on August 10, 2020 in Springfield, MO at the age of 94. Ruth was raised in Wyandotte, OK and was the granddaughter of the last surviving full blood Wyandotte Native American. She graduated early from high school at the age of 16 and attended Haskell Indian College in Kansas where she received a business degree. She went to work for the Indian Agency in Miami, OK and was recruited during the war for the Manhattan Project in Oak Ridge, TN. It was there that she met her 1st husband, Horace Hylemon. While working the next three years at Oak Ridge, they rode Harley Davidson Motorcycles. From this union two daughters were born, Shirley and Nancy. In 1986 she married Albert Jones, and they traveled in their motor home throughout the United States and enjoyed taking her three grandsons on fishing and camping trips. She attended Sunday School and Church with her grandmother growing up and was saved at an early age at the Wyandotte Methodist Church. Ruth is survived by her daughters, Shirley & husband Ed Ford and Nancy & husband Jon Packard; one step-son, John & wife Peggy Hylemon; her grandchildren, Jacob & wife Melissa Ford, Josh & wife Kyra Ford, and Ian Packard, Tara Hylemon, Cris Hylemon, Don Hylemon, and Susan & husband Tim Halliar; five great-grandchildren, Taylor Ford, Skye Ford, Jessie Ford, Lexi Jack, and Levi Boyd; and one brother, Glen and wife Verna Weaver. Graveside services will be held at 1:00 p.m. on Friday, August 14, 2020 in the Wyandotte Nation Cemetery in Wyandotte, OK on with Chief Billy Friend officiating. Services are under the care and direction of the Cantlon-Otterness & Viets Funeral Home in Buffalo, MO. In lieu of flowers the family requests donations be made to the Wyandotte Nation Cemetery Fund.

Ruth Dean Weaver Hylemon Jones, daughter of the late Ray and Esther Weaver was born on April 10, 1926 in Wyandotte, OK and departed this life on August 10, 2020 in Springfield, MO at the age of 94. Ruth was raised in Wyandotte, OK... View Obituary & Service Information

The family of Ruth Dean Weaver Hylemon Jones created this Life Tributes page to make it easy to share your memories.