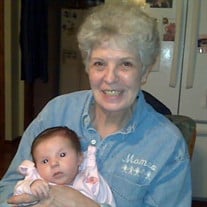 Sharon Jeanette (Marrs) Hurd, 78, died March 15, 2021 at the University of Kansas Medical Center in Kansas City, Missouri after a long and hard-fought battle with cancer. She was born on January 18, 1943, in Clarinda, Iowa the beloved daughter of Clarence Wesley and Annie Grace (Martin) Marrs. She was raised in Falls City, Nebraska where she went on to graduate high school and marry Roy Warren Hurd of Wayne, Nebraska. They would have celebrated 58 years of marriage on May 18, 2021. Sharon was preceded in death by her parents; her sisters, Joyce Smith and Clair Dunavan; brother, Clarence “Buck” Marrs; and her daughter, Roxanne Hurd Wimberly. She is survived by her husband Roy of Springfield, Missouri; her sons, Steven Hurd & wife Tracey and Darin Hurd & wife Stacey; her brother, Ronnie Marrs of Missouri; seven grandchildren, Colby Wimberly, Annie Wimberly, Abigail Forester, Olivia Feise, Charlie Hurd, Bland Landers, and Roxy Hurd; nine great-grandchildren, Brooklyn, Ava, Evan, Emma, Finlee, Chloe, Ella Grace, Gabriel, and Miles; as well as many nieces and nephews. A celebration of life will be held in the coming months. Those who wish to remember Sharon in a special way should choose to remember her as someone who was a devoted friend and aunt, she never met a stranger. She never met a slot machine or leather jacket she did not like, could beat you at any card game, and if QVC sold it, she owned it. She adored her grandchildren and great-grandchildren and loved them endlessly, as they did her. She loved the same man for 57 years and enjoyed traveling with him and keeping him in line while keeping up with friends and grandchildren. She kept her family united through tremendous loss and is now at rest. In lieu of flowers, the family requests donations be made to the American Cancer Society Hope Lodge- Kansas City, 1120 Pennsylvania Avenue, Kansas City, MO 64105.

Sharon Jeanette (Marrs) Hurd, 78, died March 15, 2021 at the University of Kansas Medical Center in Kansas City, Missouri after a long and hard-fought battle with cancer. She was born on January 18, 1943, in Clarinda, Iowa the beloved daughter... View Obituary & Service Information

The family of Sharon Jeanette Hurd created this Life Tributes page to make it easy to share your memories.

Send flowers to the Hurd family.