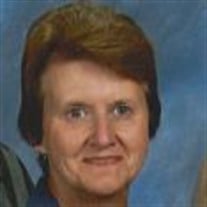 Sharron Marie Evans Neil, daughter of the late Floyd and Mae (Perkins) Swanigan was born on October 29, 1942 near Jake’s Creek in Dallas County, MO and departed this life on July 31, 2019 near Buffalo, MO. At the time of her passing she was 76 years and 9 months of age. Sharron was reared and attended school near Tunas, Missouri. After graduation she moved to Kansas City, Missouri and worked for Kansas City Life. She was united in marriage to William “Paul” Evans on September 29, 1962 and to this union one son Brad was born. They moved back to southern Missouri in 1971 and bought a farm near Tunas, Missouri. Sharron loved her farm life and could often be found out in the field looking at her “pet” cows. She also enjoyed spending time with her family, especially her grandchildren and great-grandchildren. She worked for Mercy for over 30 years before retiring. She stayed active with the hospital volunteering her time for whatever they needed. After Paul’s passing, she married Jack Neill on September 27, 2014. Sharron was preceded in death by her husband William “Paul” Evans; seven brothers, Hugh, Bill, Spencer, Drew, Neil, Gene, and Loren Swanigan; and three sisters, Opal Davidson, Esther Byler, and Wilma Carter. She is survived by her husband Jack Neill of the home; her son, Brad & wife Missy Evans of Buffalo, MO; three grandchildren, Cody Evans, Chad Payne & fiancé Katy Hensley, and Taiylor Evans; two great-grandchildren, Seth Evans and Taylor Morgan; Jack's twin sons, James R. "Rusty" & wife Jill L. Neill and Roger Neill; Jack's grandchildren, Cooper J. Neill, Whitney Neill, Isabella Neill, and Justine Neill; Jack's sister, Danna Hartley; Jack's niece, Amy Hartley; and Jack's great-nephew, Tyler Freeman. She also leaves other family members and many friends who will all truly miss her. Funeral services will be conducted at 10:00 a.m. on Monday, August 5, 2019 at the Calvary Chapel Freewill Baptist Church in Buffalo with Pastor Mark Elliot officiating. Escorts will be Cody Evans, Chad Payne, Russ Swanigan, Randy Swanigan, Randy Weaver, and Stuart Swanigan. Interment will be in the Plad Cemetery under the direction of the Cantlon Otterness & Viets Funeral Home of Buffalo. Visitation will be from 4:00-6:00 p.m. Sunday at the Funeral Home. In lieu of flowers, the family requests donations be made to the Calvary Chapel Freewill Baptist Church.

Sharron Marie Evans Neil, daughter of the late Floyd and Mae (Perkins) Swanigan was born on October 29, 1942 near Jake&#8217;s Creek in Dallas County, MO and departed this life on July 31, 2019 near Buffalo, MO. At the time of her passing... View Obituary & Service Information

The family of Mrs. Sharron Marie Evans Neill created this Life Tributes page to make it easy to share your memories.