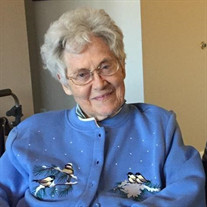 Shirley Ann Westfall, 90, of Jefferson City, Missouri, passed away on Tuesday, February 26, 2019, at the Capital Region Medical Center in Jefferson City, Missouri. Visitation will be held on Saturday, May 4, 2019, from 11:30-12:00, followed by a Memorial Service at 12:00 p.m. at the Grace Community United Methodist Church in Buffalo, Missouri. A memorial fund has been established at the funeral home in memory of Shirley. Online condolences can be sent to the family at www.lewisfuneralhomes.com. The Sorden-Lewis Home for Funeral and Cremation Services in Lone Tree is caring for Shirley’s family and arrangements. Shirley Ann Simpson was born on December 12, 1928, in Iowa City, Iowa, the daughter of Glenn and Lela (Gringer) Simpson. She graduated from the University of Iowa with a Bachelor of Arts degree. On September 21, 1957, Shirley was united in marriage to Gerald Westfall in Iowa City. Shirley was a teacher and worked at Hills Bank prior to marriage, and later served as a Post Master Relief in Missouri. Shirley was a longtime member of the Methodist Church, currently a member of the Grace Community United Methodist Church in Buffalo, Missouri. She was also a member of the Northeast R-IV PTA in Cairo, Missouri, and the Rural Letter Carriers Auxiliary. Shirley was a devoted wife and mother, who put her family before all else. Her husband always called her his sweetheart and the love of his life. She is remembered fondly by her children for reading stories, singing lullabies at bedtime, and creating a happy home for all. Her friends and family remember her lovely smile, her kindness toward all, and her genuine caring heart. Shirley will be deeply missed by her husband, Gerald of Jefferson City, MO; her children, Jill Westfall of Atlanta GA, Tamara (Gary) Arthaud of Rogersville, MO, Kurt (Jeanette) Westfall of Liberty, MO, and David (Kimberley) Westfall of Columbia, MO; seven grandchildren; nine great grandchildren; one great-great grandchild; and siblings, Donna (William) Launspach of Iowa City, Steve (Sally) Simpson of Tiffin, and Mark (Lori) Simpson of Bonaparte, IA. Shirley was preceded in death by her parents and one brother, Richard Simpson. Local arrangements are under the care and direction of the Cantlon Otterness & Viets Funeral Home.

The family of Mrs. Shirley Ann Westfall created this Life Tributes page to make it easy to share your memories.

Send flowers to the Westfall family.