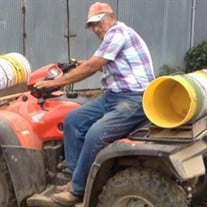 Mr. Stanley Nimmo, son of the late Edgar William and Mary Jane (Icenhower) Nimmo was born November 10, 1944 in Olive, Missouri. He departed this life on April 5, 2021 at Mercy Hospital in Springfield, Missouri at 76 years of age. Stanley was the oldest of the six children born to his parents and he grew up in Tin Town. He attended Black Oak primary school as a child and later graduated from Pleasant Hope High School. While growing up he worked on the family farm. He shared his time after graduation between the beloved family farm and Mid-America Dairyman. He worked there as a laboratory technician for over 30 years and developed many life-long friends that he cherished. After retirement, he was able to make his primary focus his cow/calf farm that he was born on with his son Brian. They were able to spend a lot of time together outdoors alongside one another. He loved all aspects of farm life/ livestock production. Stanley was also able to spend a lot of time with his grandchildren Brad and Lauren and helped to shape them into mature adults (and supply them with chicken strips and cookies along the journey). This time will always be remembered fondly and never forgotten. Stanley enjoyed being outdoors with his family and working hard. He was a quick-witted man who always had a story to share. It was truly a privilege to know and be loved by him. He is certainly missed. Stanley was preceded in death by his parents, Uncle Fenton Nimmo and Aunt Captola Ryan and husband Jack Ryan, Uncle George “Frank” Nimmo, Aunt Tinkle Nimmo, and brother Paul Edward Nimmo. He is survived by his son Brian and wife Stephanie Nimmo of Buffalo, Missouri; one brother Lester and wife Judy of Buffalo, Missouri; three sisters, Sue and husband Doug Stidham of Tunas, Missouri, Millie and husband Terry Gates of Hartville, Missouri, and Katie Hall of Lebanon, Missouri, his two grandchildren: Bradley and wife Kelsey Nimmo and Lauren Nimmo and long-time family friend Jerry DeFreece. He has many other friends and family that he has left behind that will also miss him. Services are under the direction of Cantlon Otterness and Viets Funeral Home in Buffalo, Missouri. Visitation will be from 12:00 p.m. – 2:00 p.m. Service will follow and begin at 2:00 p.m. Thursday, April 8, 2021 with Pastor Brad Duff officiating. Interment will be at Union Grove Cemetery. In lieu of flowers the family requests donations may be made to Fresenius Kidney Care.

The family of Stanley Nimmo created this Life Tributes page to make it easy to share your memories.

Send flowers to the Nimmo family.