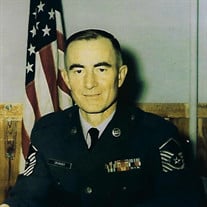 Sydney Reginald Crowder passed peacefully from this earth on March 12, 2022, at home, with his family by his side. Syd, as he was known to his friends, lived a long and meaningful life, 98 and a half years worth. He was born on July 3, 1923, in St. Louis, Illinois. His parents were Glen and Irene Crowder. At an early age, his family moved to Colorado and lived on a large farm. Syd received most of his schooling there. In 1937, his parents relocated to Missouri, buying a farm near Elkand. In 1938, he joined the Civilian Conservation Corps program for one year, working at state parks. In 1942, during WW2, he volunteered for military duty. He was assigned to the Army Air Corps. After a brief training period in the United States, Syd was sent to England and was assigned to the 8th Air Force B-24 Bomber Base. He worked there until the war ended. Having decided to make a career of the Air Force, he transferred to Germany for three years, assisting with the Berlin Air Lift while there. Upon Syd’s return to the US, he was stationed at a base in Washington near Seattle, where he met his future wife, Helen. They married in 1953, and to this union five children were born, four daughters and one son. He and Helen lived three years in England, three years in Spain, and were stationed to many Air Force bases across the United States as well. He was also stationed in Bangkok, Thailand for two years, during which time the family lived in Seattle. While in England in 1957, President Eisenhower traveled to Scotland on vacation, and requested the presence of Air Force drivers for his staff. As Superintendent of the base motor transportation unit, Sgt. Crowder was selected to head the 2-week operation and had an opportunity to meet and talk with the president. It was one of the highlights of his military career. During his 30 years in the Air Force, Syd received many distinguished honors and medals. He retired with the rank of Senior Master Sergeant. His comments about military life were that it was challenging but rewarding. He enjoyed meeting many interesting people over the years, the opportunity to travel to many amazing places, and most of all, the honor and pride of serving his country. After his retirement from military service in 1972, the Crowder family moved to the Ozarks, and lived on a farm near Charity, Missouri. Syd had always had an interest in livestock, especially horses and beef cattle. He enjoyed working on the farm and riding his horses. In early 1973, he began employment at Zenith TV plant in Springfield, and worked there for 14 years. After retiring from Zenith, he became more active at St. Williams Catholic Church in Buffalo. He also joined the Knights of Columbus, and participated in activities there, as well as the DAV, the Farm Bureau, and the Missouri Beef Cattleman Association. Sydney and his family enjoyed traveling, even after retirement, and he and Helen loved spending time with their children and many grandchildren. Sydney was preceded in death by his wife, Helen; his five year old daughter, Eva; his parents; his sister, Dorothy; a brother-in-law, Winford Mitchell; and several aunts and uncles. He is survived by his children, Susan, Debra, Patricia, Nancy and John; 10 Grandchildren, 13 great-grandchildren; two great-great-grandchildren; and his brothers, Donnie, George and Jerry. He also leaves other family members and many friends who will all truly miss him. Funeral services will be held at 11:00 a.m. on Thursday, March 17, 2022, in the St. Williams Catholic Church in Buffalo, Missouri with Father Simon, Father David, and Father Tom officiating. Pallbearers will be Landon Crowder, Joe Marshall, Curtis Marshall, Brandon Franklin, Gabe Meraz, and Sean Petti. Interment will be in the Charity Christian Cemetery under the care and direction of the Cantlon-Otterness & Viets Funeral Home of Buffalo. Visitation will be from 6:00-8:00 p.m. Wednesday at the Funeral Home. In lieu of flowers, the family requests donations be made to the DAV.

Sydney Reginald Crowder passed peacefully from this earth on March 12, 2022, at home, with his family by his side. Syd, as he was known to his friends, lived a long and meaningful life, 98 and a half years worth. He was born on July... View Obituary & Service Information

The family of Sydney R. Crowder created this Life Tributes page to make it easy to share your memories.

Sydney Reginald Crowder passed peacefully from this earth on...

Send flowers to the Crowder family.