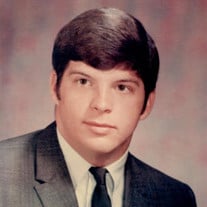 Ted Lynn Gallion, loving husband, father and grandfather, passed away on Thursday, January 30, 2020, at the age of 68 at his home in Buffalo, Missouri. Born November 5, 1951, in Rantoul, Illinois, Ted was the only child of Elmer Lynn Gallion and Ida Jewel (Smith) Tucker. He had fond memories of growing up in Carthage, Missouri, where he was involved in a variety of sports, school government and other activities. He graduated in 1969 from Carthage High School. Ted attended college at Northeast Missouri State College and was part of the 1969, 1970 and 1971 M.I.A.A. conference champion Bulldogs football team inducted into the Missouri Sports Hall of Fame in 2012. He received a BS degree in Microbiology. Later, Ted received his MBA at the University of Missouri-Columbia and worked for the University for 28 years. Ted was a member of The Church of Jesus Christ of Latter-day Saints. He loved his Savior, Jesus Christ and served in the Arizona Tempe Mission from 1976-1978 at the age of 25. Upon his return home, Ted married Sundee Ines Sherwood on October 20, 1978. Together they raised seven beautiful children and he made each one think they were his favorite child! Family was the most important thing to Ted (and that included the family pets). There’s nothing he enjoyed more than supporting his children and grandchildren in all their activities. He had deep feelings of gratitude and love for his precious mother and his stepfather, O’Neil, as well as his uncle and aunt, Ervin and Suda (Smith) Maynard, lovingly known as “Pop” and “Mom.” Ted served his community and his church in a variety of capacities and was known for his quiet strength, easy smile, and thoughtful ways. Ted was preceded in death by his mother, Ida; his father, Elmer; stepfather, O’Neil; and Mom and Pop Maynard. He is survived by his wife, Sundee, his seven children, Summer (and Brandon) Wier, Big Sky, MT; Benjamin (and Jerrica Thedell) Gallion, Aurora, MO; Reina Gallion, Bozeman, MT; Jewelyn (and Cody) Brown, Las Vegas, NV; Tielle Gallion, St George, UT; Dan (and Allison Parrott) Gallion, Provo, UT; and Melodee Gallion (and puppy, Jax), Bozeman, MT; and his 12 grandchildren, Zia, Chloe, and Kaydon Wier; Serra, Owen, Ethan, Kate, and Caleb Gallion; Leila, Mila, Petra, and Calvin Brown. Ted will be greatly missed by his family, relatives and friends. Services scheduled at 11 a.m. on Wednesday, February 5, 2020, at the Cantlon Otterness & Viets Funeral Home in Buffalo. Visitation prior to the funeral from 9:00 to 11:00 a.m. Interment will be in the Pleasant Hill Cemetery under the care and direction of the Cantlon Otterness & Viets Funeral Home of Buffalo. In lieu of flowers, memorials may be made to a hospice group of your choice.

Ted Lynn Gallion, loving husband, father and grandfather, passed away on Thursday, January 30, 2020, at the age of 68 at his home in Buffalo, Missouri. Born November 5, 1951, in Rantoul, Illinois, Ted was the only child of Elmer Lynn Gallion... View Obituary & Service Information

The family of Mr. Ted Lynn Gallion created this Life Tributes page to make it easy to share your memories.

Send flowers to the Gallion family.