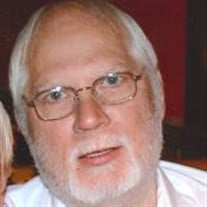 Terry Glen Roberts went home to be with his Lord and Savior on Friday, October 11, 2019 after a long battle with cancer. Terry was born in Blackwell, Oklahoma on September 29th, 1948 to Fern Brewer Roberts and Marvin Glen Roberts. Terry grew up in Oklahoma, graduating from Blackwell High School in 1966, receiving his diploma early so he could join the military. Terry served in the United States Marine Corp and served his country from 1966-1969 in Vietnam. Terry was proud to be a Vietnam Veteran. Terry was baptized as a child in the Methodist church, but really found his faith when he was water baptized later in life, Terry found the Holy Spirit. Terry and wife Becky spent the years of their marriage traveling as RV Camp Hosts throughout the country, providing the chance for Terry to hunt and fish, which brought him so much joy. He was most happy in nature, and spending time with his wife in their travels. Terry was preceded in death by his parents, and two brothers, Jerry Roberts and Bobby Lee Roberts. He is lovingly remembered by his wife Becky; a sister, Janice Sharp of Vinita, OK; a brother, Ronnie (Julia) Roberts of Ava, MO; a daughter, Rebecca; two sons, Bobby Lee and Jason; three stepdaughters, April (Heath) Kooiman, Amber (Brian) Hoogestraat, and Arrin Weinkauf; 18 grandchildren; 2 great-grandchildren; and many nieces and nephews. Friends and family are invited to attend a visitation at Cantlon Otterness & Viets Funeral Home 931 W. Main St. Buffalo, MO 65622 on October 16, 2019 at 10am, Celebration of Life at 11am with Pastor Archie Engledow officiating. Escorts will be Darrell Mass, Clint Moore, Josh Mass, Tyler Roberts, Destin Roberts, and Alexis Blanscet. Honorary escort will be Ricky Johnson, Sr. Music will be provided by Bob Elder. In lieu of flowers, memorials can be directed to Becky Roberts 556 State Hwy H, Elkland, MO 65644 to be donated to a Veterans Non-profit.

Terry Glen Roberts went home to be with his Lord and Savior on Friday, October 11, 2019 after a long battle with cancer. Terry was born in Blackwell, Oklahoma on September 29th, 1948 to Fern Brewer Roberts and Marvin Glen Roberts. Terry... View Obituary & Service Information

The family of Mr. Terry Glen Roberts created this Life Tributes page to make it easy to share your memories.

Terry Glen Roberts went home to be with his Lord and Savior on...

Send flowers to the Roberts family.