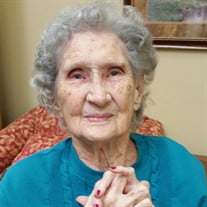 Thelma Mae Marsh, daughter of the late Johnnie and Eva (Huckaby) Hood was born on November 13, 1919 in Polk County, Missouri and departed this life on December 20, 2018 at Colonial Springs Healthcare in Buffalo, Missouri. At the time of her passing she was 99 years, one month, and 6 days of age. Thelma was reared in Polk County around Goodson and Rimby and attended school at Star Ridge. After her schooling she was united in marriage to Herbert Cecil Marsh on July 16, 1938 and to this union, three daughters were born, all of whom survive her. They made their home on a farm near Louisburg, Missouri where they spent many happy days together taking care of their family. Thelma was an excellent cook, seamstress, and kept a wonderful vegetable garden, but her passion was her flowers. She spent many hours taking care of her flowers and enjoyed their beauty. After Herbert’s passing, she started babysitting several children until they started school. Thelma was saved and baptized at an early age and was a member of the Star Ridge Church. Thelma was preceded in death by her husband Herbert; her parents; two half-brothers, Billy and Richard Hood; and one son-in-law, Kenny McDaniel. She is survived by her three daughters, Marilyn & husband Wayne Garrison of Springfield, MO, Evelyn McDaniel of Buffalo, MO, and Brenda & husband Jerry Howard of Springfield, MO; three grandchildren, Cindi & husband Dan Musick, Danny and Wanda McDaniel, and Marsha & husband Andrew Maroney; six great-grandchildren, Laura Musick, Brock Musick, Kelsey McDaniel, Ethan McDaniel, Isabel Maroney, and Kaitlyn Maroney; and her half-sister, Elizabeth Runyon. She also leaves other family members and friends who will all truly miss her. Funeral services will be conducted at 11:00 a.m. on Monday, December 24, 2018 at the Cantlon Otterness & Viets Funeral Chapel with Bro. Dennis Skinner and Bro. Dusty Armstrong officiating. Escorts will be Andrew Maroney, Ethan McDaniel, Danny McDaniel, Dan Dryer, David Cox, and Larry Davison. Interment will be in the Louisburg Cemetery under the direction of the Cantlon Otterness & Viets Funeral Home of Buffalo. Visitation will be from 10:00-11:00 a.m. Monday at the Funeral Home. In lieu of flowers, the family requests donations be made to the Alzheimer’s Association.

Thelma Mae Marsh, daughter of the late Johnnie and Eva (Huckaby) Hood was born on November 13, 1919 in Polk County, Missouri and departed this life on December 20, 2018 at Colonial Springs Healthcare in Buffalo, Missouri. At the time of... View Obituary & Service Information

The family of Mrs. Thelma Mae Marsh created this Life Tributes page to make it easy to share your memories.

Send flowers to the Marsh family.