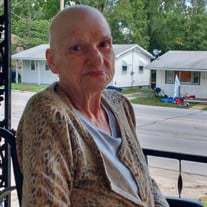 Thelma Irene Stafford was born September 28, 1935 in Dallas County, Missouri, the daughter of Bert and Myrtle (Chastain) Smith. She peacefully departed this earth on July 17, 2019 at her home in Buffalo, Missouri. Irene, as she liked to be called, was raised in Dallas County and attended Cowden School. She was united in marriage to Iden “Slim” Stafford on April 12, 1954 and to this union eight children were born. She worked at Chastain’s Nursing Home in Buffalo as an aide and in physical therapy for 23 years. Everyone that knew her knew how much she loved her children, family get togethers, camping, and laughing. She enjoyed trips down country roads, sauerkraut, and she was “family famous” for her stuffing. Irene was preceded in death by her parents; one sister, Jane; two brothers, Bob and Donnie; and an infant daughter, Beverly Sue Stafford. She is survived by four daughters, Anita & husband Bobby Carver of Buffalo, MO, Sherry & husband Gary Dame of Long Lane, MO, Brenda & husband Larry Jemes of Lebanon, MO, and Lisa Bennett of Heber Springs, AR; three sons, Terry Stafford, Roger Stafford, and Jeff Stafford all of Buffalo, MO; 19 grandchildren; 35 great-grandchildren; and six great-great-grandchildren. She also leaves bunches of extended family and friends who will forever miss her. Funeral services will be conducted at 10:00 a.m. on Saturday, July 20, 201 at the Cantlon Otterness & Viets Funeral Home with Bro. Bill Autry officiating. Escorts will be Brian Stafford, Matt Dame, Michael Stafford, Cody Bennett, Dakota Casteel, and Hunter Stafford. Honorary escorts will be Jeffrey Stafford, Jr. and Shaun Stafford. Interment will be in the Benton Branch Cemetery under the care and direction of the Cantlon Otterness & Viets Funeral Home of Buffalo. Visitation will be from 6:00-8:00 p.m. Friday at the Funeral Home. In lieu of flowers the family requests donations be made to help with the funeral expenses.

Thelma Irene Stafford was born September 28, 1935 in Dallas County, Missouri, the daughter of Bert and Myrtle (Chastain) Smith. She peacefully departed this earth on July 17, 2019 at her home in Buffalo, Missouri. Irene, as she liked... View Obituary & Service Information

The family of Thelma Irene Stafford created this Life Tributes page to make it easy to share your memories.

Send flowers to the Stafford family.