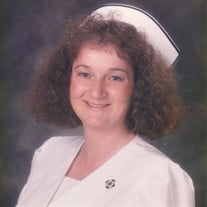 Theresa Kay (Crowe) Dill was born in Prosser, Washington on March 11, 1959, to William Frederick Crowe, Sr. and Betty Jane (Jackman) Crowe. Theresa was raised by her maternal grandparents, James Clifford Jackman and Eunice Bernice Jackman near Fristoe, Missouri. She grew up on what she lovingly referred to as “The Farm”. She loved her grandparents very much and often remarked that she couldn’t have had more loving parents. Her grand-dad kept a pint of whiskey under the truck seat and they’d have a little nip on cold days. On hot days, the farm equipment would breakdown and they’d go to Dairy Queen for parts. Legend has it that she was spoiled and she didn’t disagree. Theresa was an avid horse rider. She “would take off on her horse and be gone all day.” She was also a barrel racer. She loved farming with her grand-dad, chasing cows, milking, and pulling pranks on visiting city slickers. Her nickname was “Meanie Kay”. She also had aunts, uncles, cousins, and her brother and sister, Bill Crowe and Jo Ann (Crowe) Cox around to play with and harass. She graduated from Warsaw High School in 1977 and went to work at Rival Manufacturing in Clinton, Missouri. It was while working there that she met Jack Dill and, once he was house broken, taught to wear clothes, and use a fork, married him on May 16, 1981. They moved to Enid, Oklahoma where she worked at various jobs and had their first child, Amanda Bernice Dill in 1982. They moved to Selmore, Missouri in 1985 where Travis Lee Dill was born. They bought a little house on a couple of acres in Long Lane, Missouri in 1987 and Tyler Ross Dill completed the family in 1988. She got to have her own little farm with cows, ducks, cats, dogs, and even a pony. In 1990, she went to college and nursing school, graduating in June 1995, from Burge School of Nursing. She began her nursing career at Meadowbrook Manor which became Colonial Springs, a skilled nursing facility, in Buffalo, Missouri. She quickly worked her way from night shift to day shift. She was Board Certified as a Gerontological Nurse in 1998. She served as the Assistant Director of Nursing from 1998 to 2000. She was promoted to Director of Nursing in 2000, and her nursing department was deficiency free for seven years. She earned her Nursing Home Administrators License in 2003 and became the administrator of Colonial Springs in 2008. During her tenure as administrator, she achieved a five star rating by the Centers for Medicaid/Medicare Service for two straight years. She was awarded Administrator of the Year in 2009 by the Missouri Health Care Association, District IV. The entire facility was deficiency free for the last three years of her time there. Other awards were, Outstanding Achievement in Safety, Customer Satisfaction Award, and Facility Leadership Award. She retired in 2018 but it didn’t last. In January 2019, she went to work for Ozarks Community Health Center until February 2020, when illness forced her to leave. She loved taking care of the residents at Colonial Springs. She knew each one of them by name, knew their medical conditions, medicines, family members, and personalities. She would often help feed them at meal times. She made lifelong friends with her co-workers and staff. She will be remembered for her grit, iron will, and determination for excellence as well as her wisdom and capacity for caring about others. Theresa passed away on February 10, 2021, from heart failure. Theresa was preceded in death by her parents, grandparents, and her sister, Jo Ann Cox. She is survived by her husband, Jack L. Dill of Buffalo, Mo, her daughter Amanda (Dill) Kennedy of Pleasant Hope, her son Travis Dill and his wife Tiffany of Buffalo, her son Tyler Dill and fiancé Melissa McCord of Fair Grove, Mo, her grandchildren, Rylee Dill, Sydney Kennedy, Andrew Kennedy, and Natalie Kennedy, her brother Bill Crowe and wife Kathy of Edwards, Mo and many aunts, uncles, cousins, nieces, and nephews. Visitation will be on Tuesday, February 16, 2021 between 6-8 pm. Funeral services will be held at 2:00 pm. on Wednesday, February 17, 2021 in the Cantlon-Otterness & Viets Funeral Home, Buffalo, Mo.

The family of Theresa Kay Dill created this Life Tributes page to make it easy to share your memories.