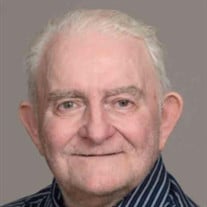 Tommy Jr. Austin, 83, was born and raised in Halfway, MO on April 14, 1937. The son of Alva Dredd and Martha Opal (Moore) Austin. He passed away November 1, 2020 at Colonial Springs in Buffalo, MO. Tommy attended Halfway school. He went to work at an early age to help support his family after his father passed away. He had various jobs working with Charles Moore as his vet assistant for many years. He then worked for MFA in Buffalo in the feed area. He also worked on several farms assisting with their animals; working outside was his delight. He always had various animals on his small farm East of Buffalo. Tommy was a member of New Hope Baptist Church where he served as treasurer for many years. He drove the church bus and took loads of kids and adults to attend various services and church activities. He was a very active member until his health did not allow him to attend regularly. Tommy was preceded in death by his wife of 56 years, Betty (Glass) Austin; his parents; three brothers, John, Lawrence, and Alvin “Buck” Austin; and two sisters, Carolina Todd, and Gladys Summers. Survivors include his daughter, Roberta Ikerd of Buffalo, MO; two sons, Martin & wife Corrina Austin of Buffalo, MO and Mike & wife Heather Austin of Long Lane, MO; one sister, Naomi & husband Doyle Barham of Halfway, MO; a brother-in-law, Bill & wife Debbie Glass of Urbana, MO; seven grandchildren, Kami & husband Brandon Coltrin, Kriston Neitzert, Joseph Austin, Jeanette& husband Riley Peterson, Brent Austin, Joshua Austin, and Lydia Austin; and ten great-grandchildren, Damion, Devon, Kayla and Deegan Coltrin, Ethan and Emily Austin, Isaac and Isaiah Peterson, and Emma and Jayden Austin. He also leaves many nieces, nephews, and extended church family and friends. He will be missed and thought of often by all who knew him. Graveside services will be held at 10:00 a.m. on Friday, November 6, 2020 in the New Hope Cemetery with Dr. Robert Baker officiating. Escorts will be Brandon Coltrin, Kriston Neitzert, Joseph Austin, Brent Austin, Joshua Austin, and Jeanette Peterson. Interment will be in the New Hope Cemetery under the care and direction of the Cantlon-Otterness & Viets Funeral Home of Buffalo. Visitation will be from 6:00-8:00 p.m. Thursday, November 5, 2020 at the Funeral Home.

The family of Tommy Jr Austin created this Life Tributes page to make it easy to share your memories.

Send flowers to the Austin family.