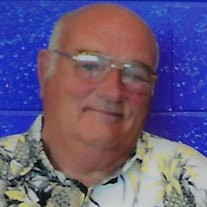 Tommy Dean Kapica age 73 of Buffalo, Mo. was born January 1, 1946 to Jackie (Blades) Kapica and Walter John Kapica in Springfield, Mo. Tommy passed away November 18, 2019 at Cox South Hospital in Springfield, Mo. Tommy attended Roberson and Bowerman Elementary, Reed Junior High, Hillcrest and Central High Schools. He met his only Love in elementary, went “steady” in Junior High then Linda and Tommy were married in High School at the age of 16. They were married for over 57 years. He worked from driver to assistant manager at Meeks Lumber Co. for 10 years, and as a factory supervisor for over 20 years while operating his family dairy farm at Fair Grove for 18 years. He had helped his sons here in Buffalo for over 20 years with their businesses and always enjoyed visiting with the customers. Tommy was also a 32nd Degree Masson with the Strafford Masonic Lodge. His family was always most important. He loved hunting and fishing, rebuilding classic cars with his friends, and going on some great vacations with friends. He was saved and baptized at the age of 21 and is now with his Lord and Savior. Tommy was preceded in death by his parents, Jackie (Blades) Kapica Stout and Walter John Kapica; stepfather, Hubert Mason Stout; father and mother-in-law, Myrl and Ellen King; nephew, Michael John King; and granddaughter, Tiffany Leigh Kapica. He is survived by his wife, Linda Jean Kapica of the home; two sons, Steven Scott and wife Desree Ann Kapica of Springfield, Missouri and Bryon Duane Kapica of Buffalo, Missouri; his brother and sister-in-law, Harry and Mary King of Springfield, Missouri; his half-brother, Frederick Kapica of Valparaiso, Indiana; his half-sister, Rebecca Jefferson of Kouts, Indiana; and his grandchildren, Bryson, Keeleigh and Jaxson Kapica of Springfield, Missouri and Matt and John Frye who always called him Grandpa. Graveside services will be held at 2:00 p.m. Friday, November 22, 2019 at the Bellview Cemetery in Springfield, Missouri with Dr. Douglas Earls officiating. Pallbearers will be Gerald Pryor, Robert Crowder, Terry Lindsay, Steve Benson, Matt Frye and John Frye. Services are under the direction of the Cantlon Otterness & Viets Funeral Home of Buffalo. Visitation will be from 6:30 to 8:00 p.m. Thursday, November 21, 2019 in the Cantlon Otterness & Viets Chapel in Buffalo.

The family of Mr. Tommy Dean Kapica created this Life Tributes page to make it easy to share your memories.

Send flowers to the Kapica family.