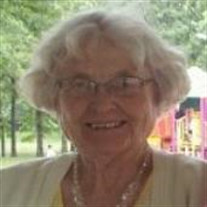 Vera Lucille (Lucy) Bennett Chapman was born on the family farm in Long Lane, Missouri on May 8, 1927, the second daughter of rural mail carrier George Albert Bennett and his wife Parthena (Parnie) Genevra (Rose) Bennett. She passed away on August 29, 2018, at the age of 91 surrounded by several loving family members. Lucille was preceded in death by her husband Bob of 47 years, her parents George and Parnie, and her sister Opal. Raised in Long Lane community meant lots of farm chores and regular church attendance to the Pisgah Baptist Church. She loved taking care of animals, camping outdoors, gardening, and cooking. Her best and life-long friend would be her sister Opal. They would raise their families together and would literally speak to each other every single day. Opal’s lifelong nickname for Lucille was “Lou” After a courtship which included airplane rides and a convertible from a sailor returning home from wartime service, she married the love of her life Robert (Bob) Warren Chapman on May 16, 1948. They began married life living five years above the Bill Chapman Hardware store in downtown Buffalo surviving on 50 cent fried chicken meals. Together they were blessed with and raised three children; Robert Bennett, Deborah Lucille, and William Warren. Their lives and work would be deeply centered in the Dallas County community. She worked side by side with Bob in their local True Value hardware store and family farms raising prized Registered Angus cattle for more than forty years. Her real passion however would always remain the love and dedication of educating children. She attended both Southwest Baptist University in Bolivar, Mo. and Missouri State University in Springfield, Mo. for her undergraduate degrees. She achieved her advanced and degree from Drury University in Springfield, Mo. with a Masters in Special Education Lucille’s work of more than 30 years in education began as the sole teacher in one room school houses in rural Dallas County, Mo. However, the bulk of her career would be serving as first grade teacher at the DA Mallory Elementary School in Buffalo, Mo. Many of her “first graders” would remember the countless number of pictures and booklets sent home of their work and artwork, reading book reports in a hollowed-out console television set, achieving astronaut status on the “Countdown to the Moon” project, the “Dinosaur Days” activities, singing numerous songs with her playing the piano, and plaster of paris figurines and chained penny bracelets for almost every holiday occasion. After retirement and the loss of Bob her husband, Lucille moved to Rolla, Mo. where she continued her teaching through instructing GED courses. There she became an active member in the Rolla Church of the Nazarene, served as “Toodles” to the grand kids and great grandkids, and participated in and hosted several of the 1944 BHS class reunions. Lucille enjoyed preparing countless and elaborate dinners for family gatherings, playing family games together, hunting arrowheads, fishing, cookouts by burning brush piles, bird calling and watching, finding thousands of four leaf clovers, and being a life-long St. Louis Cardinals fan. Lucille was a proud daughter, sister, mother, aunt, grandmother, and great grandmother. Her life was richly blessed with several friends, a strong and unshakeable faith in God, and love for children’s education and always helping others. She considered their primary family goal was to dedicate, educate, and communicate to her children. These goals were fulfilled while watching all three children grow up and receiving college and advanced degrees. Survivors include the three children Robert (Bob) Chapman and his wife Kelly (Ingram) Chapman of Rolla, Mo., Debi Shafer of Linn, Mo., and William (Billy) Chapman of Rolla, Mo.; eight grandchildren, Brad, Linley, Lucas, Kennedy, Kacy, Tassi, Rob, and Tiffani; and seven great grandchildren, Melissa, Jayden, Jolee, Baylor, Dallie, Estellise, and Judson. Visitation for Lucille will be from 5 to 7 pm on Monday, September 3, 2018 at the Cantlon, Otterness & Viets Funeral Home, 931 West Main Street in Buffalo, Mo. Services will be at 10 am on Tuesday, September 4, 2018 at the same location. Interment will be at Memorial Gardens of Memory in Buffalo, Mo. the following the funeral. In lieu of flowers, memorials may be made to the Rolla Church of the Nazarene in Rolla, Mo.

Vera Lucille (Lucy) Bennett Chapman was born on the family farm in Long Lane, Missouri on May 8, 1927, the second daughter of rural mail carrier George Albert Bennett and his wife Parthena (Parnie) Genevra (Rose) Bennett. She passed away on... View Obituary & Service Information

The family of Vera "Lucille" Chapman created this Life Tributes page to make it easy to share your memories.

Send flowers to the Chapman family.