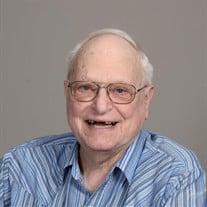 Vernon Leroy Frantz, son of the late Floyd A. and Lucile (Franks) Frantz was born on October 13, 1935 in Warsaw, IN, and departed this life on September 11, 2018 at Pine Lodge in Buffalo, MO. At the time of his passing he was 82 years, 10 months, and 27 days of age. Vernon was reared and attended school in Warsaw, IN. After his schooling, he moved to Arizona where he began his career as a carpenter. He built houses, cabinets, and did masonry work. Vernon met and was later united in marriage to Bernice Parris. They made their home in Arizona for a short time before moving to Buffalo, MO in 1962. He continued his carpentry work and taught the Vo-Tech Building Trades Class for 13 years. Vernon was a member and Deacon of New Hope Baptist Church, and was the song leader for nearly 45 years. He loved his Church and Church family, and never missed a service. He was also a member of the Gideon’s International in Buffalo, MO. In his spare time, he enjoyed working on old tractors. Vernon was preceded in death by his parents and one daughter, Rachel Akins. He is survived by his wife Bernice of the home; two sons, David & wife Carissa Frantz of Grove Springs, MO and Matthew & wife Diane Frantz of Louisburg, MO; two daughters, Valerie & husband Eugene George of Strafford, MO and Martha & husband Mike Lewis of Long Lane, MO; son-in-law, Jeff Akins of Buffalo, MO; one brother, Alton & wife Juanita Frantz of Warsaw, IN; 14 grandchildren, Jennifer & husband Daniel Herron, Becky & husband Michael Nichols, Jessica George, Nathan George, Jessica & husband Chris Longstreet, Trina Frantz, Jacob Frantz, Steven & wife Ashley Frantz, Adam Frantz, Andy & wife Amanda Lewis, Brandon & wife Darcy Lewis, Casi & husband Josh Burchell, Jeffrey & wife Ashley Akins, and Brittney Akins; and 19 great-grandchildren. He also leaves other family members and many friends who will all truly miss him. Funeral services will be conducted at 11:00 a.m. on Saturday, September 15, 2018 at the New Hope Baptist Church with Rev. Richard Prater officiating. Escorts will be Andy Lewis, Steven Frantz, Brandon Lewis, Jeffrey Akins, Adam Frantz, and Jacob Frantz. Interment will be in the New Hope Cemetery under the direction of the Cantlon Otterness & Viets Funeral Home of Buffalo. Visitation will be from 10:00-11:00 a.m. Saturday at the Church. In lieu of flowers, the family requests donations be made to the Ethnos360 (New Tribes Missions).

Vernon Leroy Frantz, son of the late Floyd A. and Lucile (Franks) Frantz was born on October 13, 1935 in Warsaw, IN, and departed this life on September 11, 2018 at Pine Lodge in Buffalo, MO. At the time of his passing he was 82 years,... View Obituary & Service Information

The family of Mr. Vernon Leroy Frantz created this Life Tributes page to make it easy to share your memories.

Vernon Leroy Frantz, son of the late Floyd A. and Lucile (Franks)...

Send flowers to the Frantz family.