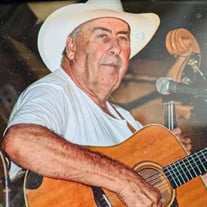 Victor Michael Wilson, 76, departed this earth on September 4th, 2020 at Cox Medical Center in Springfield MO, following a fierce battle with Covid-19. Mike was born October 1st, 1943 in Colorado Springs, CO to Victor and Clair Belle Wilson. His arrival at a mere 7 ½ months would mark the beginning of a life lived to the fullest and on his own terms. Mike grew up on the family farm outside of Drakesville, IA and attended Buttontown Country School for his elementary education. Mike was blessed with many talents over the course of his life, one of which was finding mischief. Training a pet racoon to chase and terrorize his younger sister, sneaking he and his brothers new hunting pup into the house (which he was given explicit instruction to leave outside), and riding the pink Schwinn bicycle, which he was forced to share with his brother Bob, on the frozen farm pond are a few which come to mind. Mike attended Davis County High School in Bloomfield, IA and following graduation he entered the US Trade School in Kansas City, MO. Mike was an outstanding mechanic and there was nothing he couldn’t fix. If it ran, chugged, puffed, or backfired...Mike could fix it. He served as the Director of Transportation for the Monroe County School District in Albia, IA for almost 30 years before heading south to enjoy his retirement. On October 28th, 1962 he married Sharon Norine Ellis in Centerville, IA. Together they would have four children, whom Mike would consider his greatest accomplishments. Cynthia Diane (Kelly) Deputy of Alma, Arkansas, Michelle Norine (Eric) Hamiester of Janesville, Wisconsin, Geoffrey Shawn (Brenda) Wilson of Ottumwa, Iowa, and Tabatha Jean (Dan) Hood of Des Moines, IA. The love Mike felt for his children could only be matched by the unwavering pride and immense love he felt for his grandchildren: Colton Weldon, Casey Weldon, Austin Johnson, Ryan and Andrew Wilson, Roger and Eric Griffiths, Monica Harter, Ashlee Wilson, and Erika Hood. He would later be joined in marriage to Kristin Halverson on December 20th 1987, she survives. Mike had a lifelong love affair with the outdoors. He was happiest when fishing or hunting, especially when accompanied by his son, grandsons, brother, and friends. His face was well known at the South Ottumwa Hy-Vee breakfast gathering on opening day of shotgun season. A tradition which will be carried on by the men whom he fiercely loved and raised. Mike was an accomplished musician despite his tendency to only play a quarter of each song before switching tunes or stopping to tell a story. He religiously attended the Davis County Country and Old Time Music Festival and was an integral part of its 48 year success. Mike was a teacher and helper by nature. He could often be found helping a neighbor or friend in any way he could and was the embodiment of hard work. Mike was never at a loss for words and was an encyclopedia of stories, one liners, and common sense advice. Following his retirement, he would make his home in Urbana, MO and would spend his days fishing on his beloved lake, playing music at local nursing homes and a plethora of jam sessions where he shared his gift of music and a few fish tales. Mike was preceded in death by his parents, Vic and Clair Belle Nicoli Wilson, his great granddaughter Danika Paige Ohotto, and both sets of grandparents. Left to treasure his memory, tell his stories, hunt the big bucks, and play the music he loved in his honor are his children, grandchildren, brother Robert Craig (Linda) Wilson of Glenwood, MO, his sister Nancy Sue (Roger) Lucas of Lancaster, MO, three brothers of the heart Ronny, Danny, and Terry Wilson, and many cousins, nieces, nephews, and a host of friends. Mike was an unforgettable guy who never met a stranger. His family draws tremendous comfort and pride in knowing the difference he made in the lives of all who knew him. No services are currently planned due to the Covid-19 restrictions, but a Celebration of Life will be held at a later date. The familly asks in lieu of flowers memorials be made to the Davis County Country and Old Time Music Festival in Mike’s name.

The family of Victor Michael Wilson created this Life Tributes page to make it easy to share your memories.

Send flowers to the Wilson family.