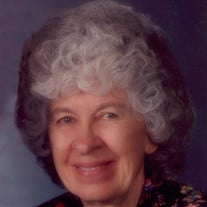 Virginia Barker, a 91-year-old former Halfway, MO resident, passed away at 12:17 a.m., Monday, December 30, 2019 at Colonial Springs Health Center in Buffalo, MO. Virginia Barker was born May 18, 1928 in Halfway, MO to Ralph and Gladys (Moore) Vincent. On June 2, 1947 she was united in marriage to Isaac Newton Barker at Red Top, MO. After moving around some, in 1959 they moved back home to a small farm in Halfway where they lived for many years. Virginia started a pioneer ministry on Jan 7, 1975 and served as pastor of Halfway Full Gospel Assembly until she was unable to do so due to her health. She also did a radio ministry with the Bolivar Radio Station as well as a weekly devotional in the Bolivar Herald-Free Press for many years. Her beloved husband, I.N., preceded her in death in 2011. Surviving relatives include her daughters: Brenda Neal of Springfield, MO, Trudy White and husband Greg of Springfield, and Dana Hayes and husband Jim of Tunas, MO, a daughter in law Angela Barker; 10 grandchildren: Dawn Cosby and husband Mike, Vincent Neal and wife NiCole, Tara Lynn and husband Randy, Randy Barker and wife Selena, Desirea Barker, Joel White, Sara Wilson and husband Brandon, Aimee Schultz and husband Marcus, Whitney Rowe and husband Aaron, and Jeshua Hayes; 12 great grandchildren and 6 great-great grandchildren as well as a host of nieces and nephews. Those preceding her in death include her parents, husband, son Rodney Barker, and an infant grandson, James Hayes. Funeral services are scheduled for 2:00 p.m., Thursday, January 2, 2020 at Cantlon Otterness & Viets Funeral Home in Buffalo. Burial will follow in Greenwood Cemetery in Bolivar, MO. A visitation is scheduled from 1:00 until service time Thursday at the funeral home. Memorial donations may be made to Honor Flight.

The family of Mrs. Virginia Barker created this Life Tributes page to make it easy to share your memories.

Send flowers to the Barker family.