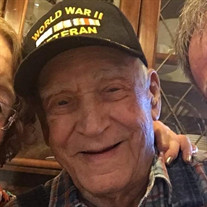 Wayne Myron Amundson, son of the late Sander and Inga (Barnes) Amundson was born on September 26, 1923 in Portland, ND, and departed this life at 8:18 p.m. December 13, 2019 at Mercy Hospital in Springfield, MO. At the time of his passing he was 96 years, 2 months, and 16 days of age. Wayne was raised and attended school in Portland, ND. After graduation, he was drafted into the United States Navy. He served his country in the Navy during WWII and Korea. After his service, he attended Mayville Teacher College. He was united in marriage to Hannah “Jerry” on October 3, 1950, and to this union one child was born who survives him. He was a handyman and worked several different jobs. He loved the farm and worked hard to support his family. Wayne enjoyed farming, fishing, and being outdoors with his dogs and cattle. Wayne was preceded in death by his wife Jerry; his brother, Arlin; one great-granddaughter, Madison Dominguez; and his parents. He is survived by his daughter, Vickie & husband Ronald Price of Republic, MO; three grandchildren, Hannah & husband David Lemons, Jonathan Price, and Jeremiah Price; and five great-grandchildren, Christopher Dominguez, William Dominguez, Hunter Lemons, Emily Lemons, and Madelyn Price. He also leaves other family members and many friends who will all truly miss him. Funeral services will be held at 1:00 p.m. on Saturday, December 21, 2019 at the Cantlon Otterness & Viets Funeral Home with Sandra G. officiating. Escorts will be Ron Price, Jonathan Price, Jeremiah Price, David Lemons, Christopher Dominguez, William Dominguez, and Hunter Lemons. Visitation will be from 6:00-8:00 p.m. Friday at the Funeral Home. Interment will be in the Plad Cemetery at a later date under the care and direction of the Cantlon Otterness & Viets Funeral Home of Buffalo. In lieu of flowers, the family requests donations be made to help with funeral expenses.

Wayne Myron Amundson, son of the late Sander and Inga (Barnes) Amundson was born on September 26, 1923 in Portland, ND, and departed this life at 8:18 p.m. December 13, 2019 at Mercy Hospital in Springfield, MO. At the time of his passing... View Obituary & Service Information

The family of Mr. Wayne Myron Amundson created this Life Tributes page to make it easy to share your memories.

Send flowers to the Amundson family.