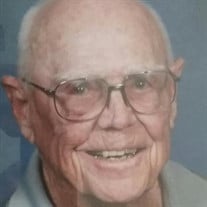 Wayne Eugene (Gene) Coltrin was born in Denver, Colorado on August 30, 1925 to Monte Eugene and Alice Rebecca (Dunlavy) Coltrin. He went to be with the Lord on July 22, 2020 at Colonial Springs Health Care Center in Buffalo, MO at the age of 94 years, 10 months, and 22 days. Gene graduated from Pomona High School in Pomona, California in 1943. Following graduation, he enlisted in the Navy Seabees. Gene served through World War II, Korean Conflict and Vietnam before retiring from the Navy in 1967 after 24 years of service. In April of 1947 he met Noma Pauline Coltrin when he was on leave from the Navy at the local roller-skating rink and a romance bloomed. After dating about six months they became engaged and then were married January 18, 1948. Two sons were born from this union: Kelly Eugene and King David Coltrin. Gene and Noma lived in various places during Gene’s Naval career years, San Diego, CA., Las Vegas, NV, Bayonne, N.J., Bremerton, WA, Vallejo, CA, Subic Bay, Philippine Islands, and again in San Diego, CA. After retiring from the Navy Gene taught welding at South Bay Trade school in San Diego. In 1972 he was hired to teach welding at the new Louisburg Vo-tech School. He remained there until 1981 when he started teaching sheet metal fabrication at Graph Vo-tech in Springfield. After working there for three years Gene did consulting work for different manufactures in the area. Gene then worked for the Buffalo Reflex as a sportswriter for a couple years. He then ran the Juvenile Probation program for the five counties retiring in 1994. After his final retirement he and Noma traveled extensively throughout the U.S.A. in their Campers and Motorhomes during their retirement years. He will surely be missed by his sons and daughter-in-law Kelly & Vicky, and King; his grandchildren, Brandon & Tessa; and his four great-grandchildren, Damion, Devon, Kayla and Deegan, his Church Family, and all his many friends. Funeral services will be held at 10:00 a.m. on Friday, July 31, 2020 in the Grace Community United Methodist Church with Pastor Mike Hargraves officiating. Escorts will be Neal Oglesbee, Terry Coons, David Phillips Robert Redd, Jim Hamilton, and David McHenry. Interment will be in the Memorial Gardens of Memory Cemetery under the care and direction of the Cantlon-Otterness & Viets Funeral Home of Buffalo. Visitation will be from 5:00-7:00 p.m. Thursday at Funeral Home.

Wayne Eugene (Gene) Coltrin was born in Denver, Colorado on August 30, 1925 to Monte Eugene and Alice Rebecca (Dunlavy) Coltrin. He went to be with the Lord on July 22, 2020 at Colonial Springs Health Care Center in Buffalo, MO at the age... View Obituary & Service Information

The family of Mr. Wayne Eugene Coltrin created this Life Tributes page to make it easy to share your memories.

Send flowers to the Coltrin family.