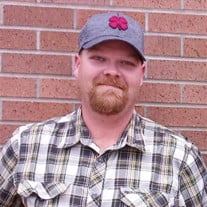 Wesley Adam Denton was born on May 21, 1987 in Rogers, Arkansas to Thomas J. Denton and Diane E. (Meyers) Kearney and departed this life on May 21, 2021 at the age of 34. Wes graduated from Buffalo High School in 2006. He went to take classes toward law enforcement. He then met Stephanie Jones and took a job as a security officer at Lodge of the 4 Seasons, where he quickly moved up as the facilities shift supervisor. Wes spent many hours at his job. The rest of his time was divided between his family in Camdenton, Missouri (Stephanie, son Matthew, and daughter Sara), and with his dad in Buffalo. When he could, Wes loved to go fishing at grandma’s pond, or target practicing with his dad, Mathew, Sara, and cousin Wayne. Wes was a caring person who would do anything to help other people. He seldom became angry and was always joking with everyone. He loved his family and his family loved him. Wes was preceded in death by his two grandpas, Louis Denton and Mike Meyers. He is survived by his dad (and best friend) Tom Denton of Buffalo, Missouri; his mom, Diane Kearney; his girlfriend, Stephanie Jones; stepson, Matthew Jones; stepdaughter, Sara Jones; three sisters, Audra Denton (Garrett Pemberton and Mikey Denton), Jessica and Carl Bunch (Shawn), and Ashleah and Mike Clear (Nova and Zandon); his paternal grandmother, Juanita Denton; his maternal grandmother, Mary Meyers; and a host of aunts, uncles, cousins, and friends who will miss him more than he would ever know. Funeral services will be held at 2:00 p.m. on Thursday, May 27, 2021 in the Cantlon-Otterness & Viets Funeral Home with Pastor Tom Schrope officiating. Escorts will be Carl Bunch, Wayne Lyon, Michael Clear, Brad Bunkowski, Jeff Radford, and Nathan Cornine. Interment will be in the Memorial Gardens of Memory Cemetery under the care and direction of the Cantlon-Otterness & Viets Funeral Home of Buffalo. Visitation will be from 12:00-2:00 p.m. Thursday at the Funeral Home.

Wesley Adam Denton was born on May 21, 1987 in Rogers, Arkansas to Thomas J. Denton and Diane E. (Meyers) Kearney and departed this life on May 21, 2021 at the age of 34. Wes graduated from Buffalo High School in 2006. He went to take... View Obituary & Service Information

The family of Wesley Adam Denton created this Life Tributes page to make it easy to share your memories.

Send flowers to the Denton family.