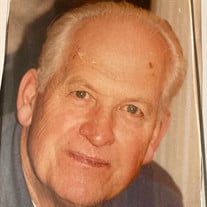 Wilford, Will, Alf, Dad, Daddy, Papa Breshears, son of the late Lawrence Ivan and Zelma Marie (Bird) Breshears was born at their home in Avery, MO on November 9, 1939. He was the 6th of seven children. Wilford grew up watching his parents toil the land to survive. He enjoyed telling stories about his father farming the land that is now Pomme de Terre Lake. He and his siblings were very close, and they all raised their families in this tradition. Family gatherings were always a big part of his life. Wilford married Betty Osborn in 1959 and to this union three children were born. They bought his parents’ farm in Weaubleau, MO in 1969 where they raised their children along with milk cows, beef cattle, pigs, chickens, horses, mules, numerous coon dogs, stock dogs, and manx cats. All were well loved. Wilford was a member of the Weaubleau First Baptist Church where he established the Church Bus Ministry which was an amazing youth outreach program. Wilford was preceded in death by his parents; three siblings, Willard Breshears, Willis Breshears, and Joleen Logan. He is survived by his sisters, Bernice Wheeler, Maxine DeHart and Linda Daugherty; his wife, Shari Salmons; his children, Carey Breshears & Carmen Moore, Cynthia & husband Jeff Harkins and Angela Breshears Hammond; stepson, Russ Cochran; eight grandchildren; nine great-grandchildren; and one 41 year old mule, Skeeter. He also leaves many nephews, nieces, and other loved ones who will all truly miss him. Funeral services will be held at 2:00 p.m. on Saturday, February 5, 2022 in the Cantlon-Otterness & Viets Funeral Home in Urbana. Escorts will be Amber Jarman, Jessee Jarman, Andrew Breshears, Anthony Breshears, Caleb Hammond, Shane Hammond, Seth Hammond, Abi Haase, and Russ Cochran. Interment will be in the Avery Cemetery. Visitation will be from 1:00-2:00 p.m. Saturday at the Funeral Home in Urbana. In lieu of flowers, the family requests donations be made to the Avery Cemetery (417-998-6487).

Wilford, Will, Alf, Dad, Daddy, Papa Breshears, son of the late Lawrence Ivan and Zelma Marie (Bird) Breshears was born at their home in Avery, MO on November 9, 1939. He was the 6th of seven children. Wilford grew up watching his parents... View Obituary & Service Information

The family of Wilford Glen Breshears created this Life Tributes page to make it easy to share your memories.

Send flowers to the Breshears family.