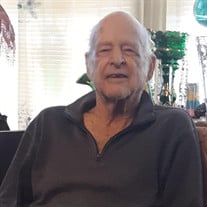 Willard "Bill" Clay Davis, son of Willard and Gladys Davis, was born August 16th, 1932 in Kingman, AZ?? The angels took him home to his heavenly Father on February 14, 2021, at home in Buffalo, Missouri, at the age of 88. He was united in marriage to Donna Belle Hebner on March 24, 1957. They would have been married 62 years when she passed away on March 10, 2019. Just a few days shy of their anniversary. Bill was a loving husband, dad, grandpa, and great grandpa. But most of all, he was a decorated Special Forces Navy Seal. From surviving The Korean Conflict to the Vietnam War and everything in between. He even cooked and baked for the sailors in between battles. His war stories of meeting US presidents to leaders of many foreign countries was impressive and were simply spellbinding. His love and passion for his country was strong and never waivered once he retired. He always was taking care of his fellow vets night and day. If you needed help, Bill was the one to call. He was the protector and provider of our family and our extended family of our closest friends from around the world. This is what he was known for. Everyone that knew Bill or met Bill for the first time, knew he was a loving, caring, big hearted guy. If he picked on you or was teasing you, you knew you were in dad's inner trusted circle. That was an honor to be in. He loved to joke, laugh, and live life to the fullest. Bill retired from the military in Pleasant Hope by purchasing a farm. That was what he dreamed of doing. It was the top 10 worst farms in Polk County. It became one of the top farms in Polk County. He raised the first-ever cross of Charolais and Angus cattle in Missouri. Bill and Donna were selling cattle in many countries of the world. Bill and Donna decided to retire to Buffalo after selling the farm. Everyone knew their house on the square because Bill and Donna proudly flew the American flag and displayed patriotic items for everyone to see. They won awards for their beautiful yard due to Donna's magical green thumb. He was preceded in death by his wife, Donna, and his parents. He is survived by his daughter, Cheri Davis Youmans, his stepdaughter, Linda Tidwell, many grandchildren, a few great and great great grandchildren, along with many dear, close friends from around the world. Funeral services will be 1:00 pm Wednesday, February 24, 2021 in the Cantlon-Otterness & Viets Funeral Home of Buffalo, Missouri. Burial will follow in the Pleasant Hope Cemetery in Pleasant Hope, Missouri under the direction of the Cantlon-Otterness & Viets Funeral Home of Buffalo, Missouri.

Willard "Bill" Clay Davis, son of Willard and Gladys Davis, was born August 16th, 1932 in Kingman, AZ?? The angels took him home to his heavenly Father on February 14, 2021, at home in Buffalo, Missouri, at the age of 88. He was united... View Obituary & Service Information

The family of Willard "Bill" Clay Davis Jr. created this Life Tributes page to make it easy to share your memories.

Send flowers to the Davis family.