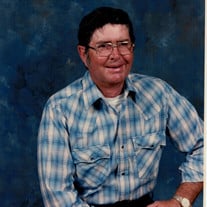 William “Stanley” Evans, born Jan. 9, 1928, son of Rev. William & Faye Evans, departed this life March 7, 2019 at the age of ninety-one years, one month, seven days. He was united in marriage to his high school sweetheart Naomi Ruth (Smith) Evans on Jan. 27, 1946. Shortly after their marriage he enlisted in the Army, training as a medic near the end of WWII. Stanley and Naomi were blessed with four children. Together they shared over thirty-nine years of marriage until her passing in 1985. Stanley accepted Jesus Christ as his savior at the age of twelve. However, at the age of thirty-seven when he came back to the Lord, he was filled with Gods Holy Spirit which completely changed his life. Stanley attended Branch Assembly of God Church, the church his parents founded, for the next 33 years, serving as deacon, Sunday school teacher and other capacities as needed. When asked what he did for a living, his answer was “everything”. He would do whatever job he could to support his family. Ultimately, he retired as a foreman bricklayer, doing the masonry on buildings such as Cox Hospital, Battlefield Mall and Camdenton School. After the passing of his first wife, he spent the next thirteen years busily occupied with fishing for crappie at the lake (a daily activity after retiring), turkey hunting, deer hunting, baby sitting, visiting family and friends, helping others and church activities. In July 1998, he married his second wife, Donna M (Ash) Evans and moved to Climax Springs, MO. Together they shared nineteen years of marriage. He remained faithful to God, attended Ozark Bethel for 20 years serving as deacon, Sunday school teacher and any other capacity as required. The next phase of his life took him to Lake Parke Senior Living, in Camdenton, MO where his inner light continued to shine. Stanley was preceded in death by his parents, both wives, three brothers, Donald, Bobby, and Duane, two sisters, Ruth and Gertrude, one grandson, Larry Gene, two great-grandchildren, Elijah and Aysha. He is survived by four children, Diana Cramer and husband Gary, Linda Ragland and husband Bill, David Stanley Evans and wife Beverly, Teresa Matthews and husband Danny. Seven grandchildren, Twenty great- grandchildren, Three step- grandchildren, and twelve step great-grandchildren, nephews, nieces, cousins, step families, and a host of other relatives and friends. Stanley, Dad, Daddy, Papaw, Grandpa, Great-grandpa, Uncle, Friend, Confidant…he will be sadly missed. We take comfort in knowing we will see him again.

The family of Mr. William Stanley Evans created this Life Tributes page to make it easy to share your memories.

Send flowers to the Evans family.