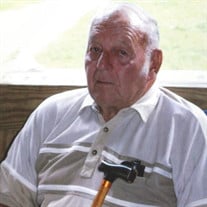 William Joseph “Bill” Shockley, son of the late William Thomas “Bill” and Clara Emma Frances (Stogstill) Shockley was born on July 8, 1930 in Webster County, MO and departed this life on September 10, 2020 at his home near Buffalo, MO. At the time of his passing he was 90 years, two months, and one day of age. Bill was reared and attended school near Conway, Missouri. He graduated from Conway High School in 1948. Bill lost his parents at an early age and he and his oldest sister Maxine and brother Jimmy finished raising their five younger siblings. Bill was united in marriage to Lorene Farr on June 8, 1950 and to this union four children were born, all of whom survive him. They made their home in Conway and Bill began his career with the Missouri Highway Department. They moved their family to Buffalo, Missouri in 1968 and bought a farm north of town. He retired after 36 years as a supervisor out of the Buffalo MODOT office. Bill was a devoted Christian and was a good example of a Godly man to his family. He was a member of the Calvary Chapel Freewill Baptist Church and the local Gideon’s International Chapter. Bill loved spending time outdoors fishing and mowing his yard. Bill was preceded in death by his parents; two brothers, Jimmy and Bob Shockley; and two sisters, Helen Shockley and Carol Rhodes. He is survived by his wife Lorene of the home; two sons, Larry & wife Rhonda Shockley of Buffalo, MO and Gary & wife Rebecca Shockley of Polk, MO; two daughters, Karen & husband Dennis Owens of Buffalo, MO and Brenda & husband Danny Rice of Buffalo, MO; one brother, Don & Christina Shockley of Belgium; three sisters, Maxine Replogle of Marshfield, MO, Mary Ellen Kilburn of Bolivar, and Patricia & husband Frank Browning of Marshfield, MO; one brother-in-law, Mike Rhodes of Foristell, MO; two sisters-in-law, Juanita Shockley of Warrenton, MO and June Shockley of Florida; eight grandchildren, Dana & husband Mark Piper, Curtis & wife Kristy Owens, Billy & wife Shelly Rice, Craig & wife Bethany Owens, Brad & wife Alex Shockley, Buck & wife Alana Shockley, Garrett Shockley, and Boone Shockley; 17 great-grandchildren; and two great-great-granddaughters and a great-great-grandson on the way. He also leaves other family members and many friends who will all truly miss him. Funeral services will be held at 10:00 a.m. on Monday, September 14, 2020 at the Calvary Chapel Freewill Baptist Church with Dr. Douglas Earls officiating. Escorts will be Dana Piper, Curtis Owens, Billy Rice, Craig Owens, Brad Shockley, Buck Shockley, Garrett Shockley, and Boone Shockley. Honorary escorts will be Dennis Owens, Danny Rice, Lendol Condren, Jim Hamilton, Jim Short, Bob Lyons, and Bud Dixon. Music will be provided by Kristy Owens. Interment will be in the Memorial Gardens of Memory Cemetery under the care and direction of the Cantlon-Otterness & Viets Funeral Home of Buffalo. Visitation will be from 4:00-6:00 p.m. Sunday at the Funeral Home. In lieu of flowers, the family requests donations be made to the Gideons.

The family of Mr. William Joseph "Bill" Shockley created this Life Tributes page to make it easy to share your memories.

Send flowers to the Shockley family.